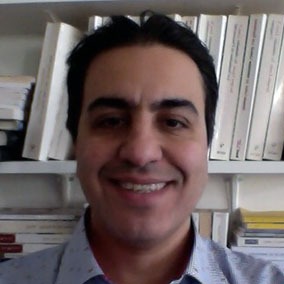 Alireza Taheri, PhD. is a candidate in the psychoanalytic training program of Toronto Psychoanalytic Society. He is a graduate of University of Cambridge, Darwin College where he wrote his doctoral dissertation on Nietzsche, Freud and Lacan. Presently, he does psychoanalytic work in private practice in Toronto where he is also actively involved in teaching Lacanian theory.

Dr. Taheri is the Co-Editor-in-Chief and the Book Review Editor of Psychoanalytic Discourse journal.

Dr. Taheri has presented on different topics such as philosophical and psychoanalytic perspectives on shame, the Lacanian theoretical understanding of the aetiology of the psychoses and metapsychology of Melancholia.

He is also engaged in writing articles on psychoanalysis and philosophy and has published papers in Psychoanalytic Discourse and Journal of the Centre for Freudian Analysis and Research.

Late Modernity, Lacanian Psychoanalysis and German Idealism: Variations on Madness and Diremption. Under contract with Routledge.

“Breaking the Spell of the Slave Revolt in Morality: From the Subreption of Identity-in-Difference to the Repetition of the Paraconsistent”. On Psychoanalysis and Violence: Contemporary Lacanian Perspectives. Volume edited by Vanessa Sinclair and Manya Steinkoler. Routledge, Taylor and Francis Group. London and New York, 2019.

“About Elly … and Polyneices or The Misfortunes of Postmodernity:

“Perverse Mothers or Mad Wives? A Lacanian Commentary on Nahaleh Moshtagh’s ‘The Repression of the Bad Oedipal Mother in Psychoanalysis’” (Psychoanalytic Discourse issue 2 May 2016).

“The Hysteric Subject of Science” (Journal of the Centre for Freudian Analysis and Research Issue No.24).

“Of Fathers and Sons: From the Name/No of the Father to the Paradoxes of Paternity” (Journal of the Centre for Freudian Analysis and Research Issue No. 27).

“‘The Return of the Primal Father’ in Postmodernity? A Lacanian Analysis of Authentic Leadership”, (co-authored with Jana Costas), Organization Studies (September 2012 vol. 33 no. 9 1195-1216).

“Baroque Perversions and Counterpoints of Love and Hate: Review of Sergio Benvenuto’s What are Perversions? Sexuality, Ethics, Psychoanalysis”. (Psychoanalytic Discourse issue 4 May 2019).

Review of Alain Badiou and Élisabeth Roudinesco’s (2014) Jacques Lacan: Past and Present: A Dialogue, translated and with a preface by Jason E. Smith (Psychoanalytic Discourse issue 1 October 2015).

“Spectre of Madness: On the Identity-in-Difference of Insanity and Being Human”. Ecrits Conference, Ghent, Belgium (September 2018).

“On the Identity-in-Difference of Religiosity and Atheism: From Narcissistic Suicidal Aggression to Symbolic Castration”. LACK Conference, Colorado Springs, USA (October 2017).

“Traversing the Fantasy: From the Mystifications of the Understanding to the Logic of the Impossible-Real” APW Conference, Toronto, Canada (July 2017).

“‘Love Thy Neighbour!’ On the Courage to Love the Non-Specular Other” 2nd Iranian Congress on Psychoanalysis & Dynamic Psychotherapy (November 2016). Invited keynote speaker.

“‘About Elly … and Polynices’: From the Realm Between Two Deaths to the Courage to Bury the Dead” 2nd Iranian Congress on Psychoanalysis & Dynamic Psychotherapy (November 2016).

“From the Law as Representation to the Law as Repetition: Breaking the Spell of the Slave Revolt in Morality” REPETITION/S: Performance and Philosophy in Ljubljana, University of Ljubljana (September 2016).

“Violence as the Psychical Subreption of the Murder of the Primal Father” On Violence: Civilization and its Blisscontents, Fordham University. 2015.

“From Pregnancy to the Second Death. Towards an Overcoming of the Bad Conscience” 3rd Biennial International, Multidisciplinary Conference EROS 2010, Nipissing University, Canada.